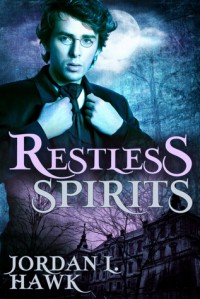 Just as wonderful the second time through. Reread with Marco.

My first paranormal read...but certainly not my last.  I absolutely loved this.  It has just the right amount of scare, mystery, heat and suspense.  Now while I have not read books like this before, I am fascinated by the paranormal.  Movies freak me out and hell no would I ever participate in a seance, but I believe. I may not have seen or experienced paranormal activity first hand but I know several people who have, including members of my own family. The hidden staircases and passages (I have to say...as an Architect, I love these)...

The seance...
Well...let's just say that not all hands were left in plain view.

"I'm sure we'll all be able to restrain ourselves from touching your equipment," Night drawled. "No matter the temptation."

And let's not forget our two sidekicks to these gentlemen...no bullshit with these two...perfect companions.

The only let down...the resolution and reason for a side mystery.  Yeah...that whole why didn't really add up for me. Oh well.

This is just the beginning...can't wait for more with these two.  In the meantime, I'll just have to check out more from this author.

A fabulous BR with Momo, Sonia, Marte and Elsbeth...loved the chats girls! 12%
Henry swallowed against the sudden dryness of his mouth. It really had been too long since his last fumble if he found himself drawn to a medium, no matter how good looking.
"fumble" I like it. ❤️

13%
Especially since the flush had only deepened when they shook hands, and he’d caught the way Strauss’s gaze lingered on him just a fraction longer than it strictly should have. Vincent had grown up in a place where accurately spotting a man who fancied a bit of buggery meant the difference between a hot meal and a beating, and he’d bet every dime of Gladfield’s prize money Strauss was one such man.
The writing...❤️❤️❤️❤️

20%
“It’s true the fairer sex commune most easily with the spirits. Supposedly because they are more…”— his dark eyes met Henry’s gaze “receptive to their intercourse.”
I am loving Night!! ❤️

25%
“I’d come upstairs to get something, and as I passed by the mirror, I looked up and— and there was a woman standing behind me!” Miss Strauss bit her lip. “She was unearthly pale, and her head just lolled to one side, like her neck was broken!”

Whew...yeah that first seance was as good as everyone said it would be.

43%
Lowering his voice so only Henry could hear, he said, "Then by all means, give us a demonstration of your thrusting rod."

48%
“We’re holes in the veil between the lands of the living and the dead. Some are pinpricks, open to receiving vague impressions or the occasional premonition. But others of us…we’re walking, talking gateways, just waiting for something to come along from the other side and use us. Without proper training, we’re vulnerable to possession, psychic sickness, insanity, and a host of other horrors.”

53%
“Why did you save me earlier?” he asked, breath soft against Vincent’s cheek. “You might have run with the others. Left me in the room to deal with Reyer’s ghost by myself.”
“Because I wouldn’t have been able to fuck you later.” It was a lie, but it sounded good and brought a scarlet flush to Henry’s face.
“You seem awfully sure I’ll let you.”
Vincent rocked his thigh against Henry’s erection and received a gasp of pleasure in return. “I think my confidence is not without reason.”

61%
Vincent peered inside. The secret passage was tiny, nothing more than the narrowest of stairs climbing up. The scent of dust and mice clung to it, but as Henry had said, someone had taken pains to clean away the worst of the grime. “I suppose it would be obvious if our culprit turned up to dinner covered in cobwebs. Assuming it is one of us.”
“Quite.” Henry glanced at him. “Shall we?”
“Lead the way." Bloody hell. Given where I am right now...I should not be this aroused. Phew!

68%
Henry flew open the door and ran into the hall.

17%
“You don’t like for things to be out of your control, do you?” Night murmured, the words almost lost beneath Gladfield’s booming voice as he led the way down the hall.
Henry scowled and tried to ignore the rush of heat to his groin. Why did the man have to be so handsome? “Who does?”
“Why, no one, Mr. Strauss.” The grin Night gave him seemed to promise all sorts of intimacies. “But sometimes losing control can be…invigorating.”
"I’m sure I don’t know what you mean.”
“Really?” Night turned half away, then glanced back. “Such a shame. And here I thought once you finished measuring your ghosts, you might like to measure something of mine.”
Oh. My. God. I love him.

28%
“I…I should go. I w-wouldn’t want to deprive Miss Prandle of your company any longer.”
Night bent his head. “But I don’t want to do this with Miss Prandle,” he said. And before Henry did more than part his lips to ask what he referred to, Night kissed him.

30%
This is going On Hold. Hopefully I can get motivated by something soon.

34%
“Your bells performed quite adequately,” Night put in.
Bwahahaha. Yes they did.

66%
Vincent propped himself up on one elbow, grinning slyly down at Henry. “Would you like to bugger me?”
Henry’s mouth went dry. “Y-yes.”

76%
“What do you want from me?” he demanded.
"A heart? Vincent isn’t Isaac.”
This scene broke my heart more the second time. :-(
Tweet