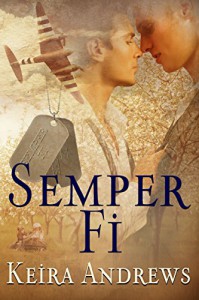 Love this one still. If not for one scene this would be a five star read for me. Just a beautiful love story. ❤️❤️❤️

As with A Forbidden Rumspringa my chest aches a bit for this beautiful story by Keira Andrews…I would not hesitate to pick up anything this woman writes.

Jim and Cal are two men who first meet each other as they head to Marine Bootcamp in 1942 and follows their unbelievable story through the 3 years of living hell they experienced in WW2. These scenes alternate in the book with scenes of them reunited again in 1948 following a 3 year separation from each other after the war. Jim’s wife has died and Cal comes to help Jim with his Apple Orchard. Jim struggles with post-traumatic stress and nightmares from the war and given the brutality of the scenes we experience on paper, it is really not surprising. Some of these scenes depicted are quite graphic.

There were moments in which I hated leaving the scenes of them in 1948 but the scenes from 1942-1945 just showed another side to their relationship that I can only say was just beautiful. I am not sure either could have lived another day without the other; had one of them been killed. While absolutely nothing physical happens between these two during this time, it is clear that their love is strong for one another.

Their reunion and time together in 1948 has a nice slow burn to it which I really enjoyed and then WOW! Nothing more to say there, except…

Is there angst?? A bit. And one scene following a short separation between the two, honestly I wish I could forget. It is quick but I could have done without reading the details. That scene alone docked it half a star for me. :(

Jim’s love for his children and his realization of his love for Cal is just unbelievably written and equally heartbreaking as they cannot truly be together as they would like given the time period and lack of acceptance. That piece is difficult and many times my mind wandered to “Brokeback Mountain”. Does this end in a HEA??YES

While this story includes Jim’s children, they are all together an integral part of the union of these two men. Sophie misses nothing and only wants to see her Daddy happy. *tears up*

“Can you make Daddy happy?”
Cal choked out a nervous laugh. “What?”
“He’s hardly ever happy. Not really.”
“Well, it’s been tough, what with your mom’s accident. Tough on all of you.”
“I know . But…” She dried her hands, a crease between her brows.
“But what?”
“I don’t think he’s ever really been happy for as long as I can remember.”
Struggling for something to say, Cal brushed a stray curl from her forehead. Finally he settled on the truth . “I’m going to do everything I can to make your dad happy.”
“Thank you.” Then she stepped forward and wrapped her arms around his waist. “I’m glad you’re here, Uncle Cal.”
He had to swallow hard over the sudden lump in his throat. Pressing a kiss to the top of her head, he hugged her back. “Me too.”

I just cannot recommend this and A Forbidden Rumspringa enough. Both are jewels.

Another lovely BR with Elsbeth.

1%
This book had not even hit our devices yet and the casting was complete...these guys could be blonde and blue eyed but who cares.... 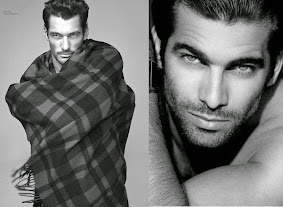 3%
It was all Cal could do not to run to him. The longing burned his chest, and his heart thumped. In the past three years, Cal had almost convinced himself his feelings had faded. Almost.

15%
“...you and Mommy never seemed to like each other very much.”
Jim focused on speaking evenly. “Why would you think that? We didn’t argue.”
“But you hardly ever smiled at each other. Not the way you smile at me, or Adam. Or him.”
<3 Kids don't miss a thing.<br/>
22%
"You're a hero to me, and don't ever think otherwise."

24%
Jim leaned in close, and Cal tried to ignore the flare of desire that skipped up his spine. “Looks like you’re stuck with me after all."
"Looks that way."

26%
Yeah, I refuse to believe this, you bitter bastard...I have my own theory! 55%
"Always playing hard to get, Jim Bennett.”
Jim chuckled. “This time I’ll only make you wait an hour or two instead of six years.”
Cal reached out again, taking Jim’s hand off the wheel and squeezing briefly. “It was worth the wait.”

I am so not OK with this. *shakes head*

72%
Jim tried to smile. “You’d suppose it would be great, huh? But I couldn’t stop thinking about you here. Wondering if you’d been hit.” He paused, taking a shaky breath. “I don’t know what I’d do if you’d been gone when I came back. Every day I hated myself for not being there fighting with you. Leaving you all to die.”
:(

75%
Jim took in the sight of the beach, already a graveyard of smoldering amtracs, and bloodied and charred men. The sand was littered with holes, and in many Jim could spot the helmets of Marines taking cover from the barrage of mortars and machine gun fire coming from the headland, which appeared carved out of coral. 76%
I need to stop right now trying to read this at work.

91%
Then there were hands pulling him through the mud, and he blinked the singed mess from his eyes. He screamed, “Cal!” The hoarse voice at his ear was the sweetest sound he’d ever heard.
“I’ve got you.”


Status Updates (Read #2):
5%
Squaring his shoulders, Cal took a deep breath. No. He wouldn’t run. He’d stayed away this long for his own sake. Now he had to put Jim first. Even if they couldn’t be together in the way Cal wanted, it would be enough. He hadn’t been here when Jim needed him, and Cal wouldn’t let him down this time.

8%
Part of Jim wanted to shake Cal off and run until the memories couldn’t catch him anymore. But he couldn’t resist leaning into Cal just for a moment. Everything about his friend was so achingly familiar, from his voice to his warm grasp to his faint scent. After three years of impossibly close quarters during the war, Jim felt like he knew Cal inside and out. Lord, he’d missed him.

30%
Jim tightened his grip, a smile splitting his face. It had been so long since he’d had such childish fun. Since he’d felt so free. Filled with gratitude for Cal in that moment, his chest swelling and tight, he leaned down and pressed their lips together.

38%
“Don’t worry. I’ll help you find someone to replace me.”
At those words, the panic and fear subsided like a wave receding from shore, and Jim could only stare, his chest heaving. Scattered pieces snapped into place in his mind— snatches of memory and images.
Cal’s smile as he passed him the bottle on the train.
The warmth of his breath on Jim’s neck as they huddled together during the cold , miserable nights.
Cal’s arm around Jim’s shoulders too many times to count.
His body protecting Jim as fire and death rained down.
Always there. Strong and steadfast.
Jim took a shuddering breath. “I could never replace you.”

54%
“The truth is, I’ve been with other men over the years. But I knew a long time ago no one else could hold a candle to you. I tried to forget you. Tried to move on.” He traced Jim’s lips with his fingertips. “In my wildest dreams, I never thought you’d want me back.”

64%
Jim scrubbed a hand through his hair. “It’s wrong, Cal. Despite what you say, deep down you know it.”
“No. I don’t.” Cal clenched his jaw. “No preacher will ever convince me. No one will.”
“What about the police? It’s a crime , the things we’ve done. We could go to prison. My God, think of the shame it would bring to our families.”
"We’re not hurting anyone. There have been men like us since the dawn of time. The law just needs to catch up. People need to catch up.”

74%
For a moment, Jim’s resolve appeared to crack. The desire and raw need in his expression stole the air from Cal’s lungs. He knew all the reasons they’d parted hadn’t changed, but he wanted Jim desperately— as much as he ever had, maybe even more. Even if it was only one more night, there was nothing stopping them.

83%
“You’ve never looked at anyone the way you do him. When he left, you were so broken hearted. It was plain as day.”

84%
She rubbed a hand over her face. “It’s a terrible thought, isn’t it? To be jealous of my friends’ happiness? To begrudge them their son and their future grandchildren? To want them to share my loss? It’s cruel, and the very meaning of sinful.”
"No.” Jim shook his head emphatically. “It isn’t. It’s human. We’ve all felt things like that. No one would ever judge you for it.”
She reached for Jim’s hands. “So why should anyone judge you for your thoughts? For your feelings? Feelings of love , not resentment and anger. Yes, some would judge you, but to the devil with them. Don’t ever hate yourself for loving.”
I think my favorite lines from this book ❤️❤️❤️

91%
Hot gore exploded over them as a blast tore the night. Jim choked on charred flesh, certain it was his own, or Cal’s. He screamed, and tasted blood.
Then there were hands pulling him through the mud, and he blinked the singed mess from his eyes. He screamed, “Cal!” The hoarse voice at his ear was the sweetest sound he’d ever heard.
“I’ve got you.”
No words. ❤️