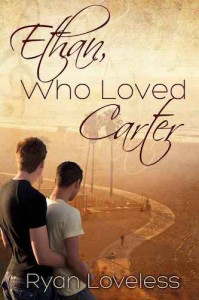 Last night had been a good start, but Carter was as eager as Ethan to get to the main event. However, being in Ethan’s parents’ bed was weird and Carter was not thinking about the implications of Nolan and Liz’s sex life behind the drawer opening that he now heard, nor the fact that shortly after Ethan began to open him with slick fingers.

Not thinking about Ethan knowing where his parents kept the lube.

Not thinking about Ethan’s parents having lube.

This book is just not for me at all. I tried but I'm bored to death and these moments just leave me cringing.

OK...so Marco pokes about the "big twist" and "butter scene" and after sleeping a few hours and being unable to sleep I plowed through the rest of this book.

Awkward is still hella awkward.  That aspect in no way improved.  The sex was really quite unbearable for me. I love awkward cute funny sex but this was nothing like that.

The "Twist"...yeah, I honestly did not see it coming and ultimately I took issue with the decision made by the parents on this one...I know hindsight can be 20/20 but considering that people in their lives knew about the accident, thinking that a secret like this can be kept is really quite stupid...and damaging.

Elliot...I fell for this kid hard and for me his story and the impact the accident and quite honestly how his parents' decision harmed this kid was swept under the carpet.  This storyline could have made for a better book in my opinion.

The "Butter Scene"...nothing puts a damper on sex in the kitchen than butter up the ass and references to a stuffed turkey.  Yeah...

As stated originally, this book just was not for me.  And in the end I probably cared more about the mental state of Elliot, Douglas and Mike than I did for our MC's.

Oh well.  DNF avoided.  Check this one off the list.